Learn more
You are here:

It had been a wet 300 mile drive down to Cornwall, firstly stopping off overnight at an Airbnb we had found in St Ives and then on to our destination for the next three days, the fabulous Polurrian on the Lizard, a 41-bedroom hotel right down on the southern tip of England, which has just undergone a refurbishment project.

The rain had eventually eased off as we left St Ives and the satnav guided us along the driveway to the hotel, which was originally built to serve the new railway line and the Victorians who were for the first time experiencing travelling further afield at the beginning of the early 1900s.

First impressions were of a building of grandeur with the most spectacular view looking out to sea. I’m no horticulturist but the varieties of plants that were adding a blaze of colour around the terraced gardens were a sight to see. I was going to have fun photographing these borders which would certainly add some colour pop to my images.

We were given a tour of the hotel and the facilities on site that included both an indoor and outdoor swimming pool, spa, gym, tennis courts, restaurant, games room and the pièce de résistance, the ‘Vista’ which gave a panoramic view across the terraced lawns down to the beach, through floor to ceiling glass. To make this experience even better, there are beautiful soft cushioned sofas to recline into, or designer chairs where you can sit and relax, (which we did quite often) whilst reading a book, socialising or just gazing out on to the Cornish coastline.

The coastal path dissects the bottom of the lawn, so within a few small steps you can head off towards the picturesque fishing village of Mullion Cove and if you are up for a longer walk head for the most southerly point in the country at Lizard Point, where we spent an hour at the clifftop café before venturing down the slipway to the old RNLI lifeboat station that was closed in 1961 but makes for a dramatic setting to photograph. On the way down we stopped and chatted to the National Trust guide who had listed all of the wildlife that had been spotted that day and included puffins, cormorants, ravens and oyster catchers. We were excited to also see two seals just off of the headland in the bay below.

There is a lovely walk down to the beach that the hotel overlooks which is about a quarter of a mile and you can either take the steps down that offer a view right on the edge of the cliff or a more leisurely slope is available for anyone with mobility issues and goes further inland. Both end up in a little cove with a golden sand beach.

For those who like a little more independence on holiday; four stunning three-bedroomed, two-bathroom seaside villas are also available to book. These high-spec villas offer guests their own private space while being able to benefit from all the hotel’s facilities.

Once you’ve spent some time exploring the coastal walks you will want to retire to the comfort of your room and the hotel does not disappoint. Warm and cosy, with gorgeous furnishings and a view overlooking the landscaped gardens. We slept with the curtains drawn back so that we could watch the summer’s early dawn light awaken us. A huge bed with a memory foam mattress that enveloped you during the night, so that you awoke fresh for the next day. There is a shower or bath, depending on your personal preference with complimentary Elemis shampoo, conditioner and body lotion. Flat screen television and tea/coffee making facilities were also included.

Breakfast was served between 08.00 – 10.00am in the restaurant that has windows on three sides so that you can enjoy the view. The full Cornish breakfast was delicious and the choice also includes a selection of pastries & muffins, fruit and yoghurts, pan fried mackerel fillets, smoked salmon with scrambled eggs or Cornish clotted cream & marmalade porridge. On the subject of fine dining, whilst we were staying here, The Polurrian on the Lizard were awarded the Food & Beverage Magazine’s award for the Best Presented Afternoon Tea of the Year. Selected from 150 entries, they were one of 15 establishments to be invited to the final in London. It was the only hotel in the South West to be shortlisted and its winning was menu was made using locally sourced ingredients. We sampled two afternoon teas whilst we were staying and the quality and presentation were first class, being beautifully presented on a large wooden board - that strawberry tart with cream was our favourite. The hotel has a wood-fired Gozney oven, which cooked our evening meals deliciously.

Thoughtfully designed spaces are to be found throughout the hotel, where you can hide away in a corner undisturbed and have the space and freedom to do things as you like. Well behaved dogs are also always welcome here, which was a nice touch, meaning you can share your holiday with your four-legged friend.

I loved the quirky touches in the Vista area, where you can sit in an old fairground ‘twister’ which is located next to the old record player and electric guitar, which is where the hotel hosts music nights and private weddings. During the evening the in-house lighting dims down and turns blue to create a nice ambience to chill into the night and on Sunday’s the hotel hosts live music sessions from some of Cornwall’s biggest names. There are also different activities on offer through the hotel, including yoga classes on Thursdays and Saturdays, as well as kayaking and surfing.

We could have easily spent our three day break entirely around the hotel, the walks along the cliffs, the nearby coves and the communal areas are enough to keep you occupied but having not stayed in this part of Cornwall previously, we wanted to see as much as possible and you are certainly spoilt for choice here.

We discovered the magnificent National Trust Kynance Cove, which is just under 7 miles away. As we approached the top of the cliffs from the car park, we were greeted with this breathtaking view down on to the sheltered coves amongst the rocks. We made our way down the steps to the cafe nestled between the rocks to sit and gaze in awe at this beautiful location.

A little further afield is the beautiful town of St Ives, famed for its art galleries and golden sand. It takes about 45 minutes in the car to reach here from the hotel but is well worth it just to see why artists have flocked here for centuries to capture its beauty.

We had always wanted to visit the fishing village of Porthleven, having seen those iconic images of the huge waves enveloping the church on the seafront. It was a lot calmer when we were there but just as photogenic with the pastel coloured cottages lining the harbour. Porthleven is only 10 miles from the Polurrian on the Lizard

Thirty minutes drive in the car will take you to the iconic St Michael’s Mount at Marazion. The fairytale castle perched high up on the rocks with the causeway leading out through the sea.

The overriding feeling that the Polurrian on the Lizard exudes is one of calm, with an easy going laid back atmosphere, comfortable furnishings in thoughtfully created spaces and fully utilising its unrivalled location with the recently refurbished ‘Vista’ offering panoramic sea views over the Lizard Peninsular.

A big ‘Thank You’ to all of the staff at the Polurrian on the Lizard for the lovely welcome you gave both of us and having us stay in your beautiful hotel.

Choose the ideal space for you, from sea views to family rooms 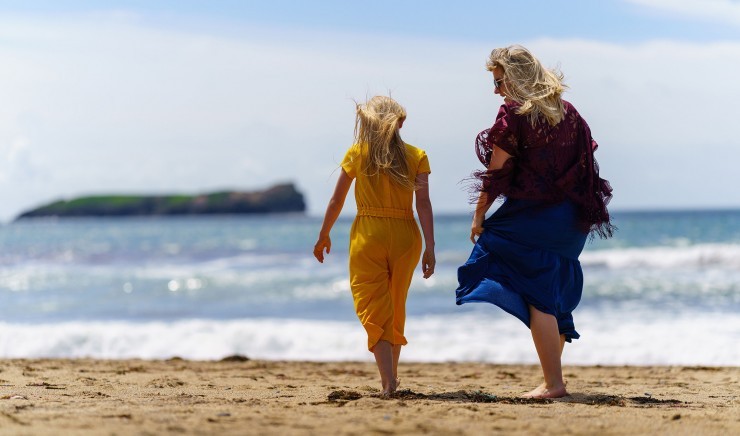 Rejuvenate at our Health Club and indulge in a soothing treatment